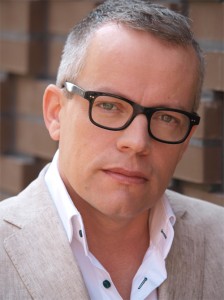 Nicolas Mansfield was born in Reigate, England, in 1966. The son of a jazz singer and double-bass player who appeared regularly at Ronnie Scott’s world-famous jazz club in London, Nicolas came into contact with the recorder and the violin for the first time in 1971. When he was 11, an unknown benefactor provided a piano for him on which he continued his musical journey of discovery. As a young violinist he earned a music scholarship to facilitate his secondary education at Reigate Grammar School. Having obtained his degree in musicology and biblical studies at the University of Sheffield, he studied as a post-graduate tenor at the Royal Northern College of Music in Manchester.

In 1989 he decided to commence his professional career in the Netherlands, where he was accepted as a tenor in the Netherlands Radio Choir in Hilversum. During this period he also gave singing lessons in the jazz and light music departments of the conservatoires of Hilversum, Gent and Amsterdam, and became the director of various choirs, both amateur and professional.

In 1999 Nicolas Mansfield left the Netherlands Radio Choir in order to pursue his activities on a freelance basis. Between 1997 and 2007 he was the director of the Nederlands Theaterkoor, a semi-professional choir that took part in performances of the National Ballet, amongst others.

In 2000 he became Chorusmaster at the National Reisopera in Enschede, where he was responsible for preparing numerous opera productions. In 2003 he established the tradition of the annual Sing-along Messiah, a concert event for amateurs and professionals that has become nationally renowned. Hundreds of people have studied and performed Handel’s Messiah under his direction. The Sing-along Messiah in Zwolle enjoyed a digital première by being broadcast on the internet via live streaming.

Nicolas Mansfield became Head of Production and Artistic Administrator at the National Reisopera in 2004. As the artistic “right hand” of the Intendant he has been involved with (amongst other things) casting and scouting, coordination of productions and personnel, chorus management, and monitoring national and international developments in music theatre. He was closely involved with the artistic contribution to the National Reisopera’s production of Wagner’s Ring Cycle.

Since 2009 Nicolas Mansfield has been choral director of Dorset Opera, a summer school for opera that aims to inspire and develop young singing talent. He is a member of the Artistic Advisory Committee of the Staetshuysfonds, a fund that offers financial support to young singers at the start of their careers. He also sits on the Artistic Advisory Council of the Grachtenfestival in Amsterdam and is a member of the programming board of Enschede’s arts festival, “Grenswerk”.

In addition, Mansfield is Artistic Director of “Cultural Sundays”, established in Enschede in 2010. This is a joint initiative of the Municipality of Enschede and the “Enschede Promotion” foundation; its main goals are to make culture more accessible and to bring amateurs and professionals closer together. Mansfield was recently a member of the visiting commission set up by the Flemish Minister of Education and Training to report on post-academic opera education in Gent, Belgium.

Nicolas is Artistic Director of the Nationale Reisopera as of January 2013.